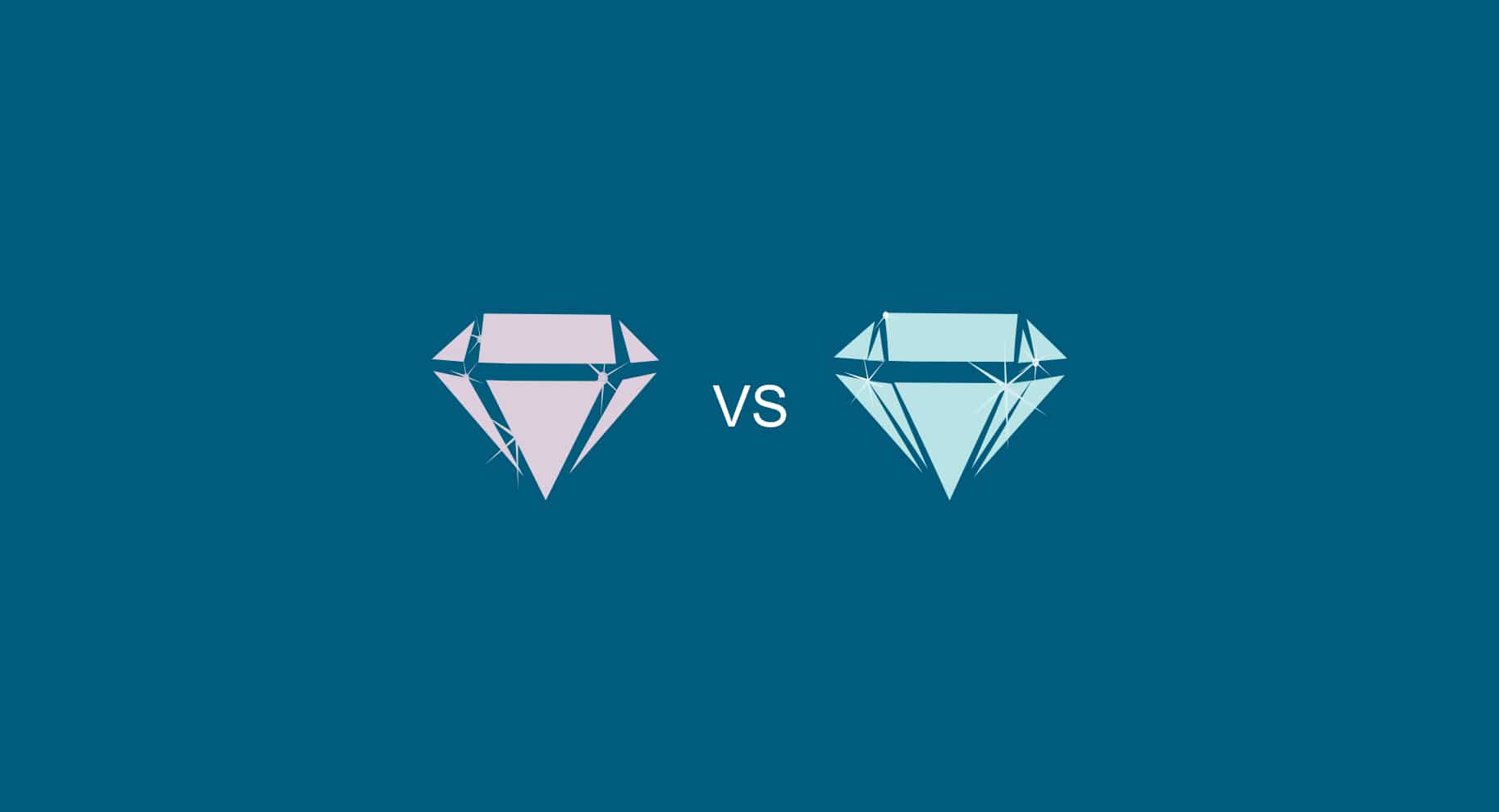 Once you begin looking at diamond alternatives for an engagement ring, two options rise quickly to the top.

The other is Moissanite.

Morganite vs Moissanite — which one is better? What’s the difference? How do they compare to each other and to diamonds?

Morganite is a semi-precious stone mined in many places in the world. Primarily it is mined in Madagascar and Brazil.

It’s a peach to pink colored birthstone for people with birthdays between October 22 and November 20.

Morganite doesn’t really resemble diamond, although it’s quite beautiful in its own right. It’s much pinker than diamond. Its brilliance is much less than diamond.

Originally, it was known simply as pink beryl, since it was a pink form of beryl discovered near Madagascar in 1910.

It pays to have money, and to be a philanthropist. Morgan had many friends, among them George Kunz, the gemologist who first discovered the pink form of beryl which came to be called Morganite.

Morgan also had friends in the New York Academy of Sciences, which approved the name change in December of 1910.

Moissanite was first discovered in 1893, in Canyon Diablo, Arizona, by Henri Moissan.

It was a material first brought to earth by a meteorite. Scientists at first thought it was diamond, but in 1904 discovered it was silicon carbide.

(That gives you a clue as to how closely Moissanite resembles diamond. Even some scientists were fooled for a while.)

Also, even today, jewelers sometimes have difficulty identifying Moissanite, and can mistake it for a diamond at first.

Since 1904, other scientists have devised ways of creating Moissanite in labs. That is the source of all Moissanite sold as gemstones today.

The color of Morganite is an enchanting salmon, peach, or more often pink, and is often compared to the color of pink diamonds.

Morganite is often heat treated to enhance its pink color. That changes the color of the stone through and through. It’s a stable change. It will last.

So if you want a pink gemstone, Morganite is an excellent choice.

Pink diamonds can be an even better choice, depending on your budget. But you’d need a really big budget for pink diamonds, as we will see a little later on in this article.

Morganite generally has good clarity, with few inclusions. It has good luster, and depth.

Its beauty and attractiveness are different from the beauty of Moissanite or diamond.

If you love clarity in a gemstone for an engagement ring, then Morganite is a good choice.

Moissanite is an even better choice for clarity. It’s quite easy to find very high clarity Moissanite gemstone. As with any gemstone, you should carefully inspect real images of the stone before buying it. But you can be assured that virtually all Moissanite stones created in labs are of very high clarity.

And that is significant, practically speaking. Not much will scratch or damage any of them.

But to be sure, the Mohs scale can be slightly misleading. It’s an ordered scale. It just ranks things in order.

That’s like saying The NFL is the hardest league, so it’s a 3. Then College football is a 2. And High School football ranks 1 on the hardness scale of football.

Does that mean that the NFL is only 3x harder than high school football?

Measuring the hardness of gemstones is perfectly scientific, with the Knoop Hardness Test.

The Knoop Hardness Test measures the actual hardness. It doesn’t just put minerals in order, like the Mohs scale does.

Here’s how the three gemstones score on the Knoop Hardness Test.

Practically speaking, in my opinion you can feel sure Morganite and Moissanite are very durable.

On the other hand, diamond is at least 5x more durable than either Morganite or Moissanite.

In comparing Morganite vs Moissanite for cost, I looked at BrilliantEarth.com

The reasons I chose Brilliant Earth:

An 8mm diameter Peach Round Morganite gemstone is, at the time of this writing, $850. (That’s the gemstone only, not yet including whatever setting you might pick out.)

So the costs are similar between these two kinds of gemstones.

Morganite is slightly less than Moissanite.

If you prefer the pink color of Morganite, and don’t want to spend what it would take to get a Fancy color pink diamond (that’s an enormous amount, as you’ll see next), then Morganite could be an excellent choice for you.

Let’s quickly compare the costs between a real world choice between Morganite and a pink diamond.

Why I Use mm of Diameter in This Comparison

Carats don’t translate exactly between gemstones, because each kind of gemstone can have a different mass. That means a given size would weigh different amounts. (Carat is a measurement which equals 200 milligrams of weight.)

So, I’ve used millimeters of diameter, and am trying to compare only round stones.

Pink Diamonds Aren’t All That Easy to Find

I couldn’t find any round cut pink diamonds of around 7mm at one of my favorite diamond sites, James Allen. That would translate to around 1.5 Carats.)

But I did find this 0.66-Carat pink diamond.

Note that the clarity of it is quite poor at I1. That means it’s definitely included. (“Inclusions” means flaws in plain English.) You can easily see all the flaws in it.

The price you pay for a pink diamond

And … even though it’s only 5.7mm across (not 8mm like the Morganite gemstone referenced above), the pink diamond is umm … $31,350 at the time of this writing.

Some people can afford that. Some can’t. It’s a little pricey for many of us.

It’s all in the eye of the beholder, of course. And if you love pink diamonds, there’s no replacement.

But if you love Morganite — and it’s certainly lovely and lovable — then you feel even better after comparing those prices.

Curb Your Enthusiasm for Size With Morganite or Moissanite?

As I’ve written elsewhere most people when they first learn of choices such as Morganite and Moissanite are tempted to max out the size of the stone.

Well, yes. But is it always?

Think it through, and if you still want a rock the size of Manhattan, definitely go for it. The costs are more affordable with Morganite or Moissanite.

But most people who think it through end up choosing a size which is comparable to the size of diamond they would be able to afford. Or at most, they go only a little larger.

The reason has to do with perception. Unless you’re quite wealthy, you probably can’t afford to buy a 3-carat pink diamond. (That would be a 9mm diameter round brilliant cut diamond, and would cost several hundred thousand dollars to a couple of million.)

You could buy this gigantic 9mm peach round cut Morganite gemstone for only $1,050 at the time of writing.

That’s the size of a 3-carat diamond.

But it might look out of place, at least if you weren’t clear that it wasn’t a pink diamond worth $7.5 million.

Then again, it might not look out of place. It’s all down to you. I can certainly see that a couple can sport a giant Morganite gemstone, own it completely as an awesome Morganite, and be perfectly well respected for that.

As you’ve learned, Morganite and Moissanite are very different.

They’re similar in that they’re excellent alternatives to diamond in an engagement ring.

But they’re very different in their styles of beauty and in their color.

Whichever one you prefer, or whether you prefer to go with tried and true diamond, is up to you as a couple.

All three are beautiful in their own ways.

Especially diamonds and Morganites are distinctive. (Moissanite is so much like diamond that it can be seen as the closest alternative to diamond, but not that different in its style of beauty or what it aims for.)

If you have questions as you’re comparing Morganite vs Moissanite, contact me. I love to help you find the engagement ring you want at a price you love.