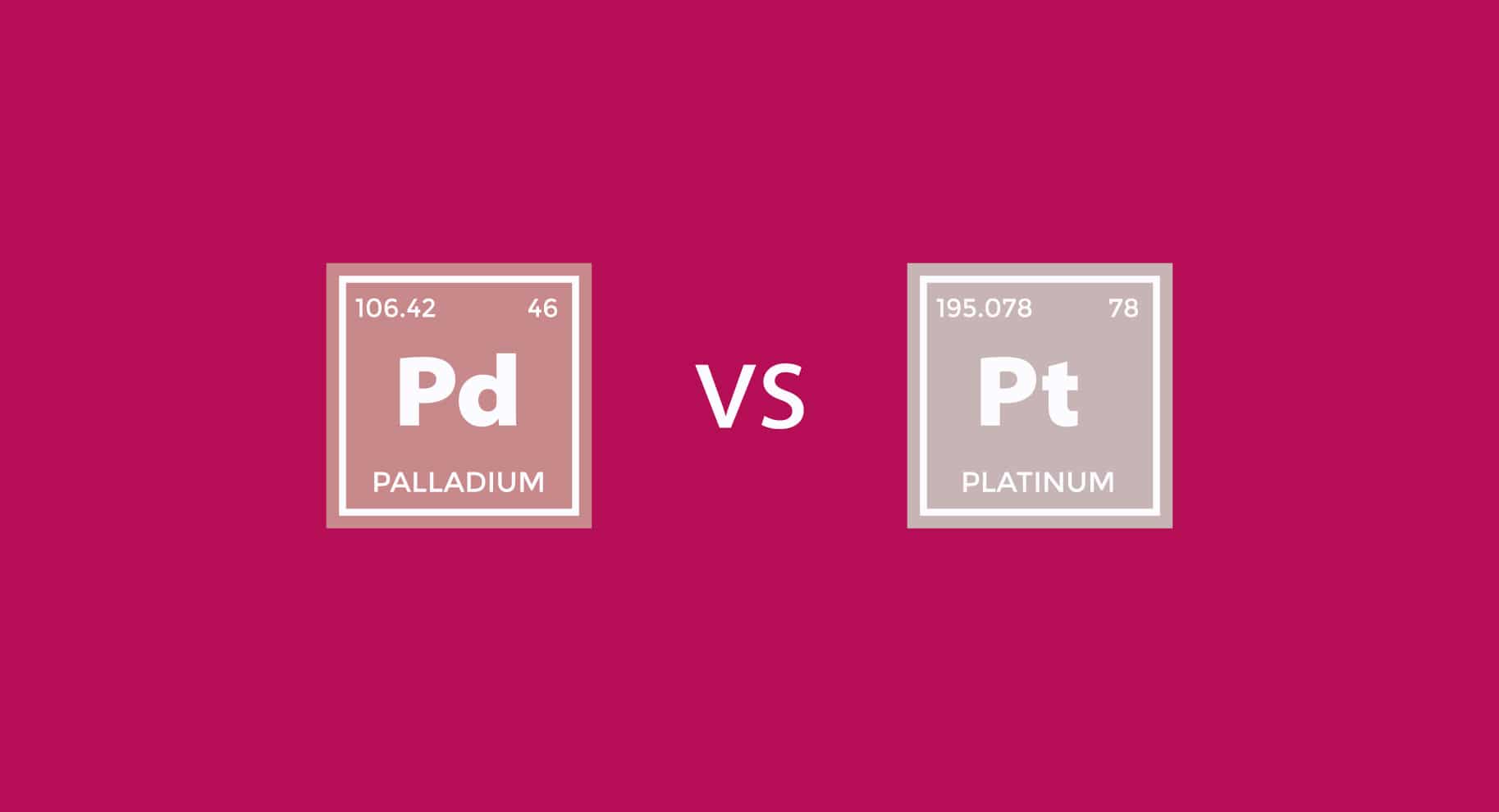 Palladium vs Platinum – which is a better choice and why?

So, you are at the point of choosing wedding rings and are looking online to see what is available? We recommend you check out James Allen, Blue Nile and Brian Gavin for a great selection and fantastic customer service.

It is likely that you may have both decided you would prefer a setting in a naturally white colored metal rather than one in yellow or rose gold.

Many couples these days are making the same choice – in fact some studies show that about 90% of couples choose a white metal setting.

White colored metal provides a universally flattering backdrop for any white diamonds in the ring and it does not pick up any yellowish or slight brownish tinge a lesser quality white diamond or other colored gemstone may have.

Silver and white gold are alternatives too, and both are malleable metals, but they do not tend to wear as well on an everyday basis.

What other options are there?

You will see white metal rings made of platinum and palladium.

They are both considered to be rare and valuable precious metals, but you will probably be more familiar with platinum as it has been successfully marketed in the wedding jewelry industry for decades as the metal of choice in wedding rings.

Palladium is a relatively new metal but is it comparable to platinum? What are their differences and similarities?

If you’re after something rare with a bit of history, this section is for you!

Platinum has a long and interesting history. It was being made into artifacts in Central America long before Columbus arrived.

Platinum was once considered an “inferior” metal by Spanish explorers and was only recognized as a new element in 1751.

The Russian government minted almost 500,000 ounces of platinum to make rubles in the mid-1800s, but it was master jeweler, Louis Cartier who first successfully created jewelry made of platinum by using an oxyhydrogen torch.

Platinum remained very rare until a large deposit was found in South Africa in 1924 and today roughly two-thirds of the world’s supply still comes from there.

Palladium was only discovered fairly recently, in the early 1800s, by the English chemist, William Hyde Wollaston. It is a chemical element with the symbol Pd and is one of the six platinum group metals.

It is actually rarer than platinum and it is only found in a few mines around the world, including Canada, South Africa and Russia. There is only one palladium mine in the US, in Maine.

Palladium was only officially recognized as a precious metal in January 2010, so any palladium wedding ring more than a gram in weight is legally required to be hallmarked.

It is currently the most valuable of the four major precious metals and there are shortages which have led to price increases. Why is that?

The reason is its extensive, world-wide use in catalytic converters for pollution control devices in car and truck exhaust systems. It is now more expensive than gold and platinum.

Does Platinum or Palladium Weigh More?

Platinum is the heaviest and densest of all the naturally white precious metals while palladium is the lightest and least dense, approximately 40% lighter than platinum.

When you put a palladium wedding ring on your finger, it will feel lighter than a platinum one.

Is that important? Once you start wearing the ring, you may not notice any difference in the weight, but it could be a factor in your choice.

Both platinum and palladium have a similar bright white color. Place them side by side and you have a hard time telling them apart.

Platinum is minimally (1 shade) lighter than palladium but both will stay white forever, unlike white gold which can develop a yellowish tinge over time.

Platinum’s slightly lighter tone may be a better match for colored gemstones.

If you have sensitive skin or metal allergies, you will want to choose a metal that is hypoallergenic and doesn’t make you break out in a rash.

It is likely to be the nickel component in other metal alloys that causes skin problems, but luckily, both platinum and palladium are hypoallergenic and are highly unlikely to affect you.

In terms of hardness, both platinum and palladium are extremely hard and durable.

Just to put this in context, a diamond is rated 10 on the Mohs Scale.

Palladium is slighter harder than platinum, but compared to gold, for instance, both platinum and palladium will be far more durable.

The hardness of both platinum and palladium means that you can have slighter smaller and daintier claws holding your diamond in place than if you had a setting made of white gold – and delicate prongs and claws make your diamond look bigger.

There is very little noticeable difference between the two on a practical, day-to-day wearability level. Both will last forever and will not corrode or rust.

Palladium is slightly more malleable than platinum but when both become scratched the surface of the metal becomes displaced and not lost.

Both platinum wedding and palladium wedding bands may get scratched over time, though palladium is about 10% more scratch resistant.

When scratched, palladium and platinum tend to gain a “patina” or more of a matte finish but can easily be restored to their original shiny look by a jeweler who can polish away any furrowing.

Both platinum and palladium are superior in their ability to withstand oxidation and corrosion.

As both metals are harder than gold, which is more malleable to work with for the goldsmith by hand, platinum and palladium are both fabricated using computer-generated 3D printing technologies and on jewelry CAD/CAM programs.

Both are difficult to fabricate by hand because they are more brittle than gold. Specific details and designs for palladium or platinum rings are printed on a wax model and cast or dye struck.

Beyond this, both platinum and palladium can take any design that is produced on gold and vice versa.

A point to mention here: a palladium ring is difficult to re-size because the metal is so brittle, so it has to be done with a laser welder rather than a jeweler’s torch flame and thus may be expensive.

And now we come to the key comparison – price.

For many years, platinum was the most popular choice in white metal wedding rings. Smart advertising campaigns were mostly responsible for this – and platinum has long been considered the most prestigious of the white metals and a top choice for wedding rings. It was also the most expensive choice.

Over the past years or so, though, preferences changed as more couples began to see the advantages of palladium, which looks almost the same as platinum but was typically half the cost of platinum.

Meanwhile, the price of platinum has fallen from $1500 to the $950range. However, platinum is denser than palladium, so almost twice the amount of palladium is needed to make the same ring.

So, which is cheaper?

Given the increased cost of palladium and the denser properties of platinum they both now cost around the same.

To Sum It All Up…

Once on your finger, you will be hard pressed to see any difference between the two, so choosing one over the other might well come down to a question of which metal has more brand caché and prestige.

When you tell your friends that you have a ring made of palladium, will it mean the same as if it were made of platinum?

Perhaps it won’t matter. Only you will know the answer to that.