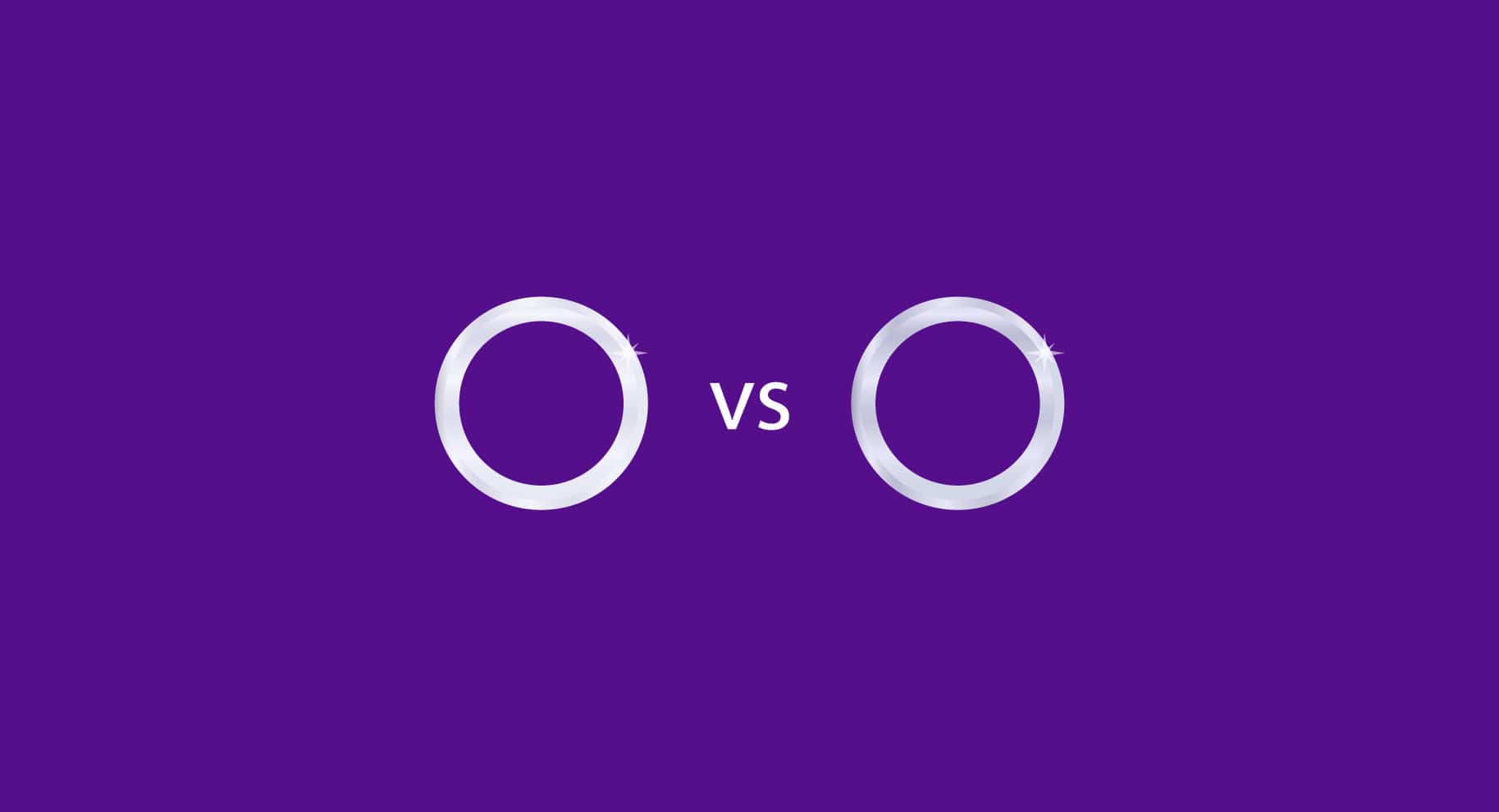 Palladium, an element discovered in 1803, is a silver colored metal named after the asteroid Pallas, which in turn took its name from the Greek goddess Pallas Athena.

It’s used in catalytic converters, dentistry, and a range of industrial applications.

And of course it’s used in jewelry — which is what we care about here.

Palladium can be used as the principal metal in a ring.

It can also be used as an alloy ingredient inside of white gold.

First of all, note that it’s been used as an alloy inside of white gold. In that way, it’s most often used as a substitute for platinum or for nickel in the recipe for white gold.

Remember what white gold is?

Just as an aside, remember what white gold is.

It’s an alloy of (yellow, the only kind of) gold with platinum, palladium, or nickel.

White gold is achieved by alloying gold with a white metal such as those mentioned here.

Why Is Palladium Better Than Platinum or Nickel in a White Gold Alloy?

Comparing palladium to platinum / nickle? Here is what you need to know:

Better than Platinum in a White Gold Alloy

Rhodium plating can also be redone, of course. No big deal. But what if you could achieve a white gold alloy which didn’t require Rhodium plating?

Turns out, you can, with palladium.

That’s good because although Rhodium plating can be renewed fairly easily, it can look less than ideal for some time before being renewed. Think of it as a car that can be repainted cheaply, but the paint scratches easily. That’s what Rhodium plating is like.

Better Than Nickel in a White Gold Alloy

Palladium is also better than nickel when alloying white gold. Nickel can cause allergic reactions in some people. Palladium almost never does.

What about 100% Palladium rings? How do they compare to white gold rings — whether or not alloyed with palladium?

Palladium as the Main Metal in a Ring

Palladium, like platinum, is not just an alloy added to gold to create white gold.

It’s also been used, more and more, as the main metal for jewelry such as wedding rings and engagement rings.

Nowadays you can buy a 95% pure palladium engagement ring.

The other 5% contains ruthenium (also a white metal) or else copper.

When you’re looking for a Palladium engagement ring or wedding ring, look for the designation PD950. As you may have guessed, that indicates a Palladium content of 95%.

Why Some People Prefer Palladium

Palladium looks a lot like white gold. For most people, it’s indistinguishable. It has a shimmering soft white and silver color, which sets off diamond quite beautifully.

Should you consider it as an alternative to gold? Is it right for you and your engagement ring?

Palladium’s main advantage is its hardness. It’s much harder than gold, at level 5 on the Mohs hardness scale when pure.

It can even hit 5.75 on the scale when it’s alloyed. And it’s always alloyed in jewelry.

How does gold compare to Palladium’s score of 5.75 on the Mohs Hardness Scale?

Another advantage Palladium has over gold is the way that it scratches. Many people don’t realize, but there’s an important difference in how metals behave when scratched.

When gold is scratched, some gold is removed. The gold scratches off and is gone. You don’t lose much gold that way. But you do have a scratch which is not easily repaired.

On the other hand, Palladium does not come off when it is scratched. The palladium of the ring is simply displaced.

To really get the difference, imagine yourself as a microscopic ditch digger. When you’re digging a ditch on gold, you haul off the gold. It’s gone. It’ll be hard to find the right color dirt and put it back.

But when you’re digging a ditch on palladium (or platinum), you leave the dirt right beside the ditch. You can easily put it back.

That’s the way scratching works on Palladium. The material is all right there beside the scratches. It doesn’t really come off.

That’s why an old gold ring used daily will show heavy scratches and even wear down. But palladium will just show a “patina”. That’s the darker color from many minute, tiny scratches.

This means a jeweler can easily repair the scratches on palladium simply by polishing.

How Does Palladium Compare to White Gold in Cost?

The price of Palladium can fluctuate over time quite a bit. In the past, Palladium was less expensive than it is now. Demand has gone up — not only in jewelry but in its industrial applications. So the price has gone up over the past couple of years.

For that reason, it’s difficult to make a precise comparison of prices of palladium vs gold.

But in general, Palladium rings cost about the same as comparable 14K white gold rings, in terms of money.

I say “in terms of money” because there are other often unnoticed costs of choosing a palladium ring.

That rarity of offer is of course appealing to some couples.

On the other hand, choosing Palladium offers you many fewer options.

With gold, you can choose among more designs at the large bespoke jewelers. Just look at the vast number and variety of designs and sizes at James Allen and Blue Nile, for example.

But not one of them is palladium, unfortunately.

With gold, you can also choose among many more individual diamonds to put on the ring. If you’re a regular reader of this blog, then you already know the huge advantages of shopping at a jeweler such as Blue Nile or James Allen.

You can rapidly sort through prices, carats, colors, shapes, cut quality, and more. You can see thousands of individual diamonds as they really are, each one with a 3D image that you can examine from multiple angles.

But unfortunately, there’s not a single Palladium ring available to put them on at many jewelers, even online.

My point is that, although Palladium offers some advantages in terms of hardness, and although it costs about the same as 14K white gold, you may be giving up vast fields of excellent choice.

Just something to think about.

How Do the Metals Compare for Resizing?

People change. Maybe rings should too.

What happens when you need to resize a ring?

This need arises more often than young people may realize, whether due to health issues, simple old age, or other causes.

In fact — cue the Buddha — everyone’s ring size eventually changes, for one reason or another.

It’s good to be able to resize a ring at such times.

Then she can wear the ring as a reminder of your unchanging love even as age and time changes you both. For that, no metal is better than gold. It’s infinitely resizable, and the skills for doing so are widespread among jewelers.

It’s possible to resize a Palladium ring. But it’s not easy. And it can be relatively more expensive than resizing a gold ring.

The reason is directly related to Palladium’s advantage of hardness. It’s a harder metal. It requires higher temperatures to make it workable.

It’s also tends to get porous under heat. That can ruin it.

For these reasons, many jewelers will decline to resize a Palladium ring, not trusting their skills to do it well.

To be most enduring, a metal must be soft and yielding enough to change a bit, so it can be worked.

Even if a gold ring is scratched, it can be repaired. Sure, it’s easier to buff the scratches out of a Palladium ring. But it’s much easier to resize a gold ring.

The Final Breakdown: Palladium vs White Gold, Which Is Better?

Which Will You Choose?

Palladium is a beautiful choice of metal for engagement rings. It requires less maintenance in terms of polishing and re-plating. It has a luminous silvery color virtually identical to Rhodium-plated white gold.

For most people, white gold is still a better choice, since it affords more freedom in choosing a diamond, and in resizing.

Neither choice is a bad one, of course. The only bad choice might be an uninformed choice.

But that’s not you. Because now you know the important issues to look at when considering a Palladium ring.

And if you want to know anything more, at any time, it’s easy to get a free expert response — direct from me.