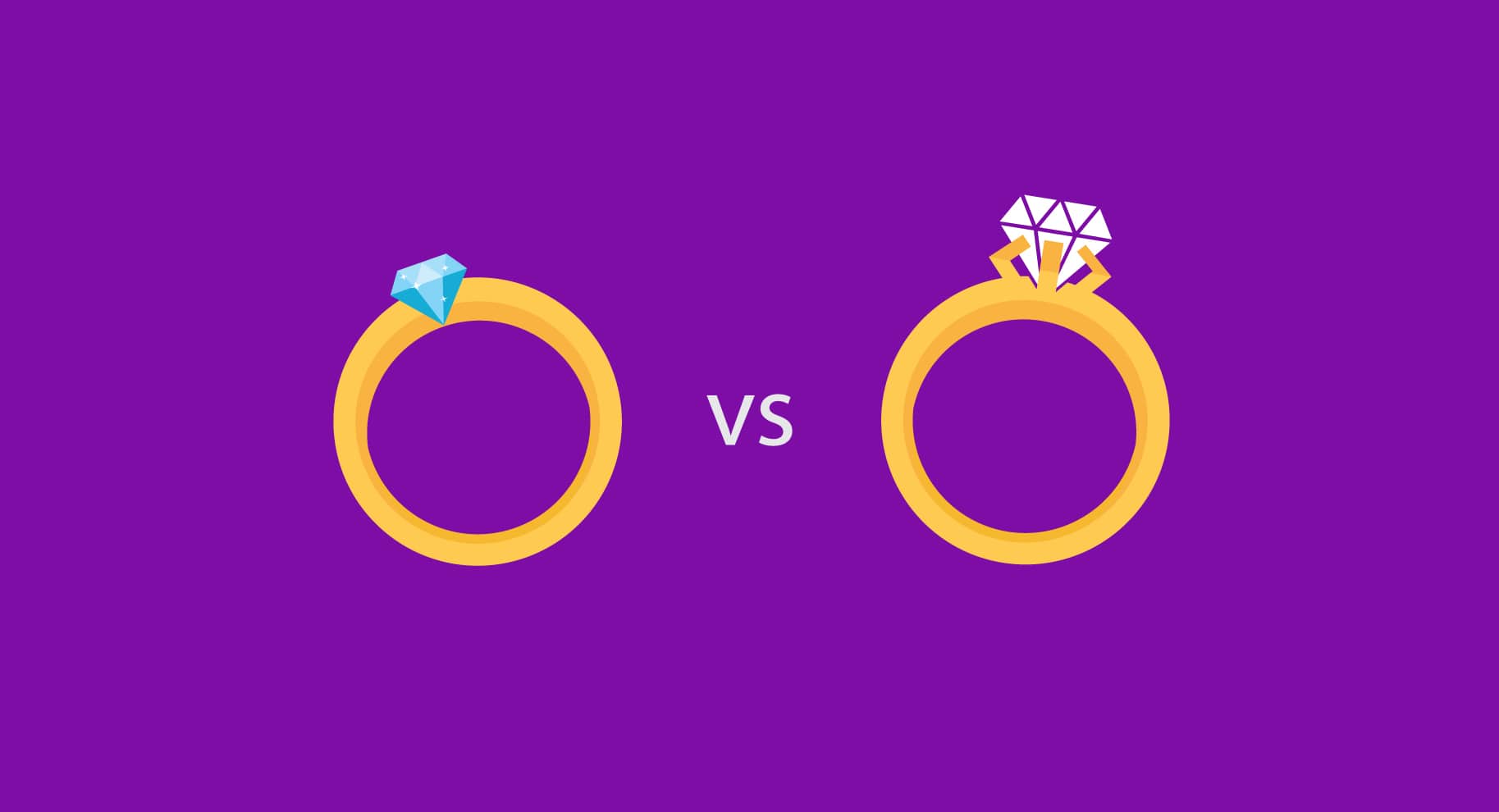 In this article, we’ll look at the differences between a promise ring and an engagement ring.

We’ll also look at some similarities.

The biggest difference between a promise ring and an engagement ring is the meaning behind them.

A promise ring usually shows that a couple have entered into a exclusive, monogamous relationship.

Although in recent years engagement rings are available in many more styles, they still typically are diamond solitaires in round cut brilliant.

Promise rings are often birthstones. They may even be simpler, without a gemstone at all.

But promise rings can be of any material, including silicone, wood, glass, ceramic, and even cloth or string.

Engagement rings are almost always worn on the ring finger of the left hand, a symbolic finger believed to be most closely connected to the heart.

Promise rings can be worn on any finger of any hand, but is also typically worn on the left ring finger.

Promise rings can even be worn around a necklace, especially if there’s an engraving on the inside of the ring that the wearer enjoys contemplating.

If the wearer desires to retain the promise ring after an official engagement ring is gifted, it’s often switched over to the ring finger of the right hand.

Since promise rings have less serious commitment behind them, and are often exchanged by couples too young or too early in their careers to want to marry, promise rings are usually quite a bit less expensive.

(That may not apply when it comes to celebrities or other very wealthy people who decided to gift or exchange promise rings. These have included Selena Gomez, Justin Bieber, Selena Gomez, and Jordin Sparks.)

Because it’s acceptable to buy promise rings from almost anywhere, they can be quite inexpensive even for a decent quality.

Any serious diamond engagement ring, however, should be purchased only from a highly reputable retailer who offers 3rd-party diamond certification.

Promise rings don’t require the durability, meaning, and certification of good diamonds. So they can be much less expensive than engagement rings.

Engagement rings need to last a lifetime, so they require much better workmanship. They also require a decent diamond, which can be found only from quality retailers who provide GIA or AGS certification.

Very rarely, rings sold by jewelers as “promise rings” are exchanged by two people who are not in a romantic relationship. They are simply good friends who want to signify their commitment to each other in friendship.

Purity rings are a kind of promise ring.

They often are related commitments.

But the commitments are also different.

A promise ring means, as we’ve seen, that the couple are promising to be monogamous until further notice.

A purity ring presupposes that “purity” means no sexual activity, which is a common belief in many religions.

So, when a couple exchanges purity rings, they’re committing

Some couples keep that commitment all the way through even an engagement, until they’re married. They wear their purity rings as a symbol of that (usually) religious commitment to abstinence.

With an engagement ring, the intent is always clear. It’s impossible to misunderstand. It means you plan to marry. And there’s little motivation by any giver to deceive, since marriage is a lifelong commitment in which both parties’ goodwill is needed.

But misunderstandings can easily happen with promise rings.

Gifting a promise ring can be a highly emotional and beautiful act. But a person’s intentions and level of commitment should always be communicated clearly.

It’s a good idea to plan the gift of a promise ring carefully. Understand what you will say, and what you won’t say.

It’s also very important that the gifting person not only offer to answer any questions the receiver has, but to insist that the questions be asked.

Tips for Deciding Between a Promise Ring and an Engagement Ring

You might want to choose a promise ring instead of an engagement ring if:

You might want to choose an engagement ring instead of a promise ring if:

Never let a lack of money cause you to buy a promise ring instead of an engagement ring, if you’re both ready to be engaged.

As we’ve seen, a promise ring means, among other things, that you don’t want to be engaged quite yet.

If you are ready, but just can’t afford an engagement ring as nice as you would like, then buying a promise ring would be sending a wrong signal to your beloved.

It’s better just to get the engagement ring you can afford.

So if you’re both ready to be engaged, keep it real, and be bold. Get an engagement ring which you can afford, even if it’s quite simple.

The meaning of an engagement ring is not in the absolute value of the ring itself. The meaning is in the value relative to your income.

Suitors are expected to buy something expensive for them, but not ruinous.

It just needs to be expensive enough that you had to sacrifice a little for it. If your beloved loves you in return, they won’t care about the absolute value of the ring.

But to receive a promise ring when they really desired an engagement ring, and you were both ready? That could confuse and disappoint them and greatly complicate the relationship.

How and Where to Buy Promise Rings

It’s also ok to select any ring that you like, even if it’s not labeled as a “promise ring.” What makes a promise ring is not so much the label or the design as the little ceremony or conversation the couple has when the ring is exchanged.

It’s not necessary to look for GIA certified diamonds for a promise ring.

The ring is intended to be a much less expensive kind of ring than an engagement ring. The diamond, if any, will be much smaller. So the color, clarity, and cut grades aren’t really important.

Of course if you prefer a more expensive promise ring, and are going for a larger diamond, then by all means seek out a ring with a GIA, AGS, or IGI certificate from retailers such as those listed just below.

These retailers, listed below, are also excellent  places to find a large selection of Fancy color diamonds.

If your budget permits it, Fancy color diamonds can be very touching and appropriate for promise rings (even if they are more expensive than birthstones).

But for promise rings, it’s much less expensive, and just as good (for the purposes of a promise ring) to shop at retailers which offer large inventories of less expensive rings, with uncertified diamonds (if any).

As you’ve seen, then, promise rings are much more varied than engagement rings in style, materials, price, and meaning.

Whether you get a promise ring or engagement ring right now depends on your intentions, the state of the relationship, and the meaning you want to give the ring.

There’s one more difference when it comes to promise rings vs engagement rings. A promise ring can be a lot more fun.

If you want my feedback on any question you have about promise rings, don’t hesitate to contact me. I’m not here just to point you toward engagement diamonds. I like seeing people get the rings they want, the rings they are ready for. If that’s a promise ring right now, it’s perfect.