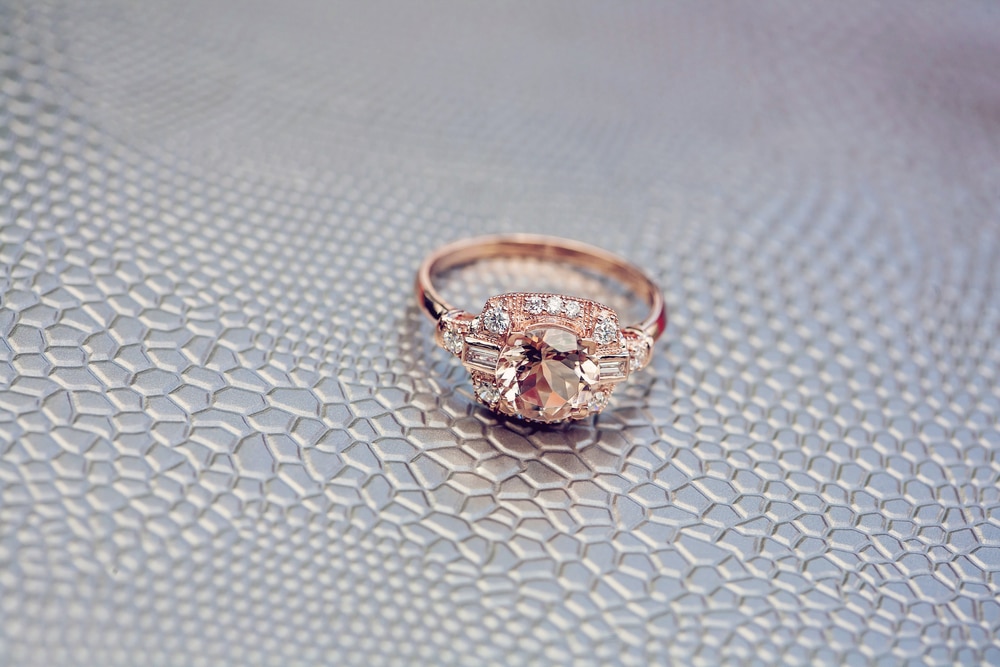 Diamonds win the popularity contest for diamond engagement ring gemstones, hands down. But does that mean they’re the best gemstone for your engagement? Not necessarily. We’ve all seen instances, in other areas of life, in which the most common choice isn’t the best for any given situation.

Why Are Some Couples Choosing Morganite Instead of Diamond?

Naturally, the question of cost is one of the first that arises in the minds of people shopping for Morganite. How much does a Morganite gemstone cost, compared to a diamond of the same size?

There’s no legitimate way to exactly compare the cost of diamonds to Morganite gemstones. The reason? Cut quality, shape, and clarity all affect any given individual stone — whether it’s a Morganite or a diamond.

But here’s an example to give you a quick idea of the difference in price. Below, I compare an 8mm diameter Morganite gemstone with an 8mm loose diamond. (Both are round shaped.)

Why Use MM When Comparing Morganite to Diamond, and Not Carats?

We have to use millimeters instead of carats because a carat is a unit of weight. (One carat equals 200mg, for those with inquiring minds. 😉 )

Morganite and diamond gemstones of the same size would have slightly different weights.

So, when comparing morganite and diamonds, you really should use size as measured in millimeters (diameter, and depth, or length x width, and depth).

As you examine each of those specific gemstones, you’ll see …

Bottom Line Cost Comparison of Morganite vs Diamond? Here It Is:

You can safely say a Morganite gemstone of “comparable quality” (that’s complicated and not exactly possible, but still) costs around 12% to 15% as much as a diamond.

Again, that’s not a number to live or die by. It’s a rough but legitimate comparison of the cost.

That’s a huge savings if you and your beloved are both interested in Morganite as an alternative to diamond.

How Does Light Performance and Appearance of Morganite Compare to Diamond?

That’s not true with Morganite.

The differences between Morganite and diamonds are always easy to see.

Here Are the Numbers From Science, for Sparkle, aka Brilliance:

(Actually, the numbers below are for the substances of Morganite and Diamond. These numbers don’t take into account the shape the substances are cut into. So a very well cut Morganite can theoretically sparkle better than a poorly cut diamond. Just don’t count on it. In general, diamonds will sparkle far better than Morganites.)

That’s all good, though.

A BMW is not a Mercedes. Or a loaded Honda. People prefer them for different reasons. The Mercedes for status. And maybe the Honda for status, if you live among friends who respect efficiency and quality.

And a Morganite is not a diamond. No one expects it to sparkle as much. But people can love it as much.

Just as with moissanite gemstones, Morganites also are never used as accents.

Morganites are just not sparkly enough for accents. And aren’t valuable enough. But mostly, it’s that quite inexpensive diamonds can be used as accents. And diamonds are always better at the function of accents than Morganite.

You can easily find engagement rings which have a Morganite center stone accented by diamonds. https://www.brilliantearth.com/morganite-engagement-rings/

Morganite is fairly durable, scoring a 7.5 to 8 on the Mohs hardness scale, which is not too far behind diamond at 10.

Morganite will last a lifetime, especially if you’re careful with it.

However, an 8 on the Mohs hardness scale compared to a 10 for a diamond? That doesn’t mean a Morganite is 8/10 as hard as a diamond.

The Knoop hardness scale, on the other hand, gives more information. It’s a linear scale of measured hardness. Not just ordered hardness. You can see how they compare on this chart.

Morganite is as hard as the mineral at the 8th place on the Mohs hardness scale. (A Topaz.)

So a Morganite is about 1/7 as hard as a diamond.

That still means that Morganite is pretty hard and durable. As hard as a Topaz!

There’s no official third-party lab grades for the clarity of Morganite. You’re on your own. (And you can also trust your online retailer, if they are trustworthy. Just also be sure to carefully examine any Morganite and satisfy yourself that it’s as clear as you prefer.)

But there’s no official grading of Morganite clarity. Look for Morganites which a trustworthy retailer calls “eye clear.” That means that the naked eye can’t spot any flaws in the Morganite when it’s mounted on a ring and worn on a hand.

Also, buy only from online retailers that offer you a policy of the right to return a gemstone within 30 days if you’re unsatisfied with it.

But here’s the good news: Almost all Morganite has few if any visible inclusions. They’re almost all at least “eye clear” and many are called “clean.”

Remember, these are designations only from retailers. No first-rate, highly trustworthy labs (for example the GIA) offer any grading reports for Morganite.

How Does the Color of Morganite Compare to Diamond?

In color, there’s really no comparison between a typical (white) diamond and a Morganite.

Morganites and diamonds shouldn’t be compared on color. No one would expect a Morganite to compete with a diamond in color.

Shop at retailers, such as Brilliant Earth, who offer real images of individual gemstones. You’ll get a feel for what color and shade of Morganite you prefer.

And that your beloved prefers. (That’s really all that counts.)

What Shapes Are Morganite Gemstones Available In?

Morganite gemstones for engagement rings are theoretically available in every shape that diamonds are available in.

However, you’ll find that in reality, they’re available mostly only in Round, Oval, Cushion, Emerald, and Pear shapes.

You can check out Blue Nile’s current selection of Morganite rings here.

How Big Should You Go With a Morganite Engagement Ring?

In my article on moissanite gemstones, I caution people against buying one that’s significantly larger than the diamond they could afford.

The reason is, for moissanite (not Morganite), other people may think that you’re pretending it’s a diamond. (Remember, moissanite looks so much like a diamond that even trained gemologists can sometimes fail to tell them apart.)

If your beloved wears a huge moissanite, the size of a diamond that you couldn’t possibly afford, people could get the wrong idea. They may think you foolishly way overspent on credit. Or that you are pretending something not-a-diamond is really a diamond. Or just be confused.

That’s not a problem with Morganite. No one with any experience in life at all would mistake a Morganite for a diamond. So you’re a lot freer socially, it seems to me, to get a huge one. You won’t be perceived as pretending that it’s a diamond. It’s obviously a Morganite. (Even if friends don’t yet know what Morganite is, they know that it’s obviously something different from a diamond.)

Morganite is a respectable, beautiful gemstone, gaining in popularity.

It’s a lovely peach or pink color. It’s as hard as Topaz. It’s generally free of inclusions. It has some sparkle. And it has connections to history, wealth, exploration, science, and the arts. Not to mention, it’s a gemstone as natural, and organically from the earth, as any natural diamond.

Morganite even has an advantage over moissanite: Morganite can’t easily be mistaken for a diamond. It is itself, its own gemstone. It makes a clearer statement than moissanite for those who want to step away from the traditional diamond.

So it’s no wonder that Morganite is more and more popular as an alternative to a traditional diamond engagement ring.

If you want to ask me any question about Morganite gemstones — or diamonds, or moissanites — don’t hesitate to ask! I’m here to help you find the engagement ring you want at a price you can afford.